In the surroundings of Lignano... Miramare Castle
Back 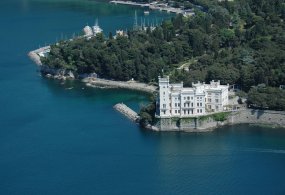 Miramare Castle is a charming place that extends on the sea just outside Trieste, behind which develops a fine park gardens with trees and plants coming from all over the world.

The castle strikes for its elegance and whiteness, that stands out with the blue of the sea and the green of the vegetation. It rises on a spur of rock in Grignano and its constructions is tied to a legend. It is said that the Archduke Maximilian Joseph of Hapsburg, overtook one day by a storm in the sea, found a shelter in the small bay of Grignano and, attracted by the charming place, decided to build here his home. In the castle he lived with the young wife Charlotte and the building became their love nest. Their lives spent in the luxurious rooms elegantly furnished, until the sudden and tragic death of Maximilian in Mexico.

Inside, the castle is divide in many rooms: the ground floor was used by the Emperor Maximilian and the wife Charlotte, while the upper floor was used, in a period after, as residence of the Duke Amedeo D'Aosta, which lived here for about 7 years and modified some rooms as the style of the time, removing also the imperial insignia and replacing them with Savoy crosses.

All rooms are well preserved and retain all the original furnishings including ornaments, furniture and objects dating back to the mid-nineteenth. Particularly noteworthy are the music room, where Charlotte played the forte-piano.

Around the castle it has been created a large park, one of the biggest in north Italy, with firs from Spain and Himalaya, cedars from North Africa and Lebanon, cypress and redwood trees from America. In the park there is also a small castle, a building that served as residence for Maximilian and Charlotte during the construction of the castle, but that became a prison for Charlotte, when she lost the reason after the murder of her husband in Mexico.

In the park there is also the historic building that houses the Tropical Park: a series of natural environments recreated to offer an adequate habitat to many species of butterflies and birds, many of which are hummingbirds.

Part of the park has been turned into Italian garden and goes nicely with large steps to the sea, where has been created the WWF Miramare Marine Park: protected fauna and flora in about 30 hectares of coastline. 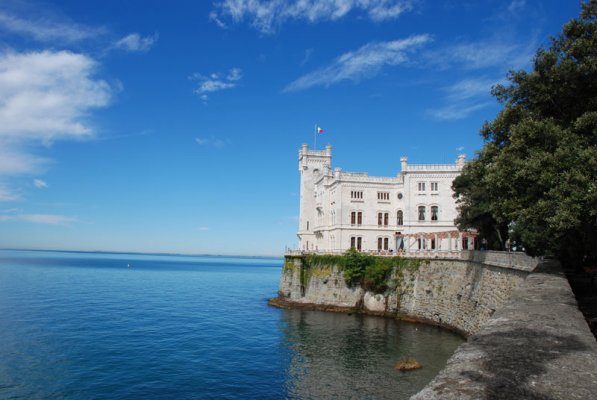